Indeed, as you know, in many cases, the best solution remains prevention, and the subject of fights between dogs is not spared!

How to tell if two dogs are fighting or playing? 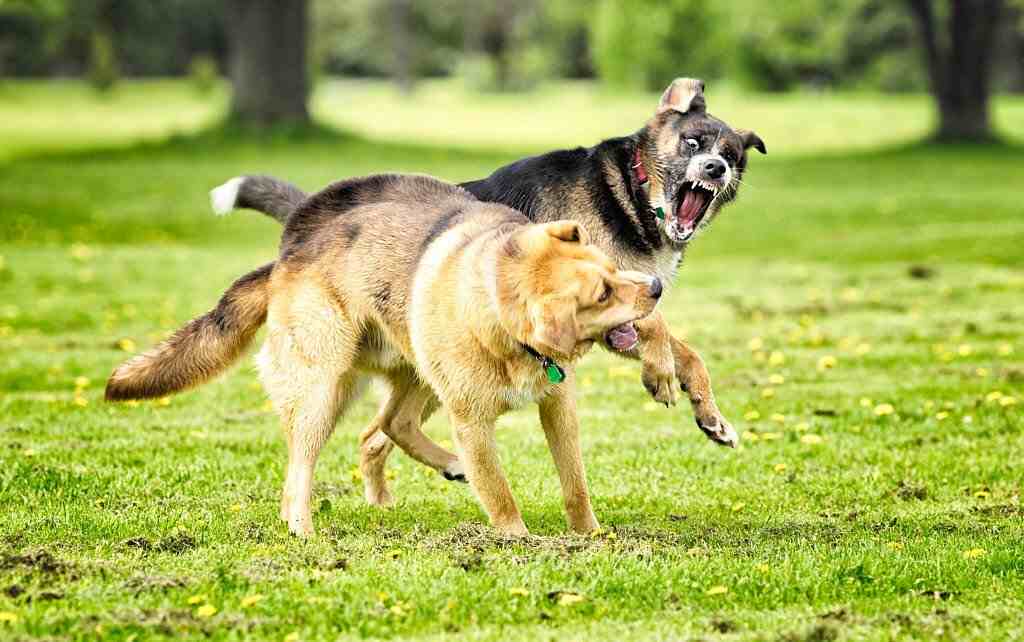 First, my first piece of advice would be to stop labeling certain dogs as “dominant dogs”. This certainly pollutes and biases behavioral analysis.

“Dogs are descendants of wolves, therefore they operate with a very strict hierarchical system that requires the presence of an Alpha male”? Well NO, this is completely false. I can explain: this current of thought is totally outdated and studies have shown that dogs do not function in the same way as wolves.

Wild animals need a fairly strict hierarchy for obvious reasons of survival of their social group. This social group is actually a family group and therefore has nothing to do with the “packs” reconstituted to observe the behavior and interactions of our dear four-legged friends!

Moreover, let’s be honest for two minutes, our pet dogs clearly no longer need to worry about their survival (compared to the bowl of kibble distributed every day, and sometimes even in self-service for the less experienced masters) and have, as a result, completely changed over the years and with the progress of domestication, their system of functioning as a group.

In fact, to “label” one’s dog as dominant would be to lend him traits that are simply no longer part of his nature. Indeed, a dog can be dominant towards a fellow dog, but this is by no means inevitable.

On a personal note, my dog, a 5 year old male Border Collie, can sometimes find himself in a position of strength and impose himself in front of a dog he “doesn’t feel” and in the next second he completely crashes into another dog. This is what we could call from a human point of view: affinities.

Secondly, be aware that a dog that gets to the point of fighting is a dog that is actually in great emotional distress.

Indeed, before getting to the point of fighting, a normally constituted dog, having all the canine codes, will send to his “opponent” a multitude of codes and signals to avoid conflict.

Why Does A Dog Get Into A Fight?

How to avoid a fight between two dogs?

As I said in the introduction of this article, the best solution is prevention, here are my 10 tips to avoid a fight between two dogs:

Tip 1: You must get your dog used to fighting at a young age.

Tip n°2 : The encounters that you propose to your dog must always be controlled, anticipated and therefore: positive! Don’t let your dog go and see all the dogs he meets because you don’t know in advance the reaction of the other dog.

Tip 3: The dogs present must be sufficiently “coded” to be able to communicate correctly with each other.

Tip 4: Con generic encounters must be regular so that your dog maintains and keeps his canine codes.

Tip 5: Despite everything, always put quality before quantity! An accumulation of bad experiences could destroy a dog and thus make him very reactive later on.

Tip n°6 : Encounters should be free or semi-free (with a very long loin). The ideal being freedom of course.

Tip n°7 : Dogs on a leash should not meet, sniff or touch each other! The simple fact of feeling trapped without being able to run away. (because of the leash) could set off the sweetest dog on the planet!

Tip 8: Don’t intervene at the slightest growl, let the dogs communicate with each other. Human intervention sometimes triggers fights. Because in many cases it is imbued with stress and deep nervousness on the part of the owner, who is afraid that his dog will get into a fight.

Tip 9: Never remain static during a meeting: walk! Go for a walk all together in “relax” mode.